Client had a Acer gaming system that had overheated and damaged the CPU. Adding extra cooling to OEM systems is not easy as they are often custom designed cases. Because of this we agreed to build a new system and salvage usable parts from the Acer.
Large heatsink and added airflow will allow this system to run games without the danger of overheating. It also has lots of upgrade potential.

This SSD was removed from a dead laptop with the hope of recovering data. Unfortunately the was encrypted and no recovery keys were available.

Still OEM manufacturers are shipping new decent spec laptops with hard drive drives instead of solid state ones.
Upgraded this new laptop and the performance is vastly improved. 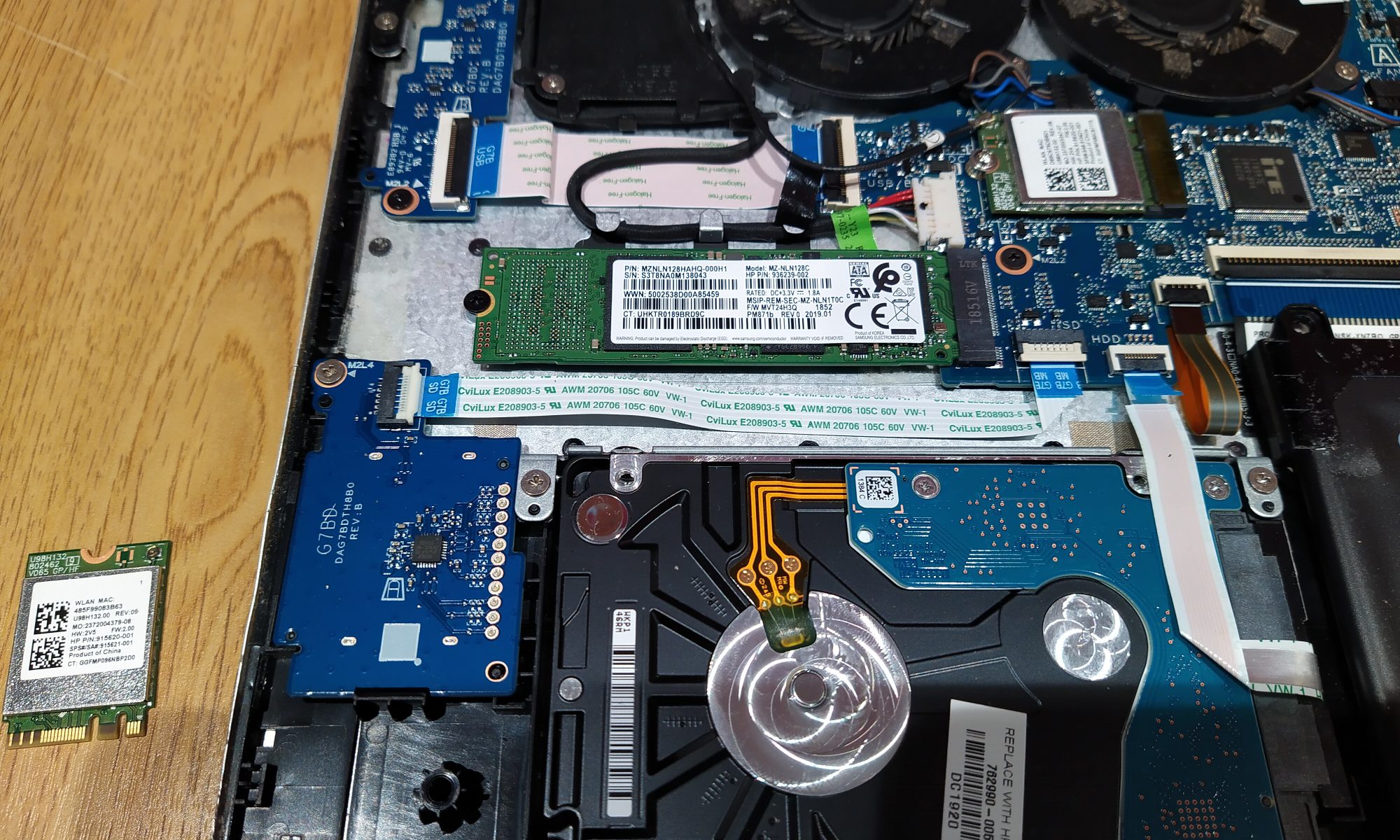 This laptop could not connect to any WiFi networks. Opened it up and replaced WiFi adaptor and it worked. Had to source a WiFi adaptor with only one antenna which is unusual as they usually have two.

This very old i7 860 system had a overheating CPU and all case fans had seized so the system was overheating. It had cross firing GPUs something that isn’t so common anymore.

With the system been so old we recommended a new computer which the client agreed. New system had a i5 10th gen, 16GB RAM and 500GB NVMe SSD. Client opted to wait for the 3000 series RTX graphics card.

This HP OEM system had a dead CPU fan so that was replaced but at the same time noticed the GPU fan’s bearings were loud so replace that with a new GPU.

Upgraded this gaming PC to a i9 to get the most out of the 9th generation motherboard.

Client required a 10Gbe switch for fast networking between NAS and servers. However it was going to be used in a SOHO environment where noise levels were an issue.
The standard fans in the XS716T are loud! At idle they only run at 20% so are acceptable but when you start adding load the fans increase.
The solution was to replace the stock fans with two ‘Noctua NF-A4x20 PWM’ fans that are a direct replacement. Link: https://amzn.to/3pxZ1a2

While these fans fitted and at first all seemed well. Noise levels were inaudible and switch temperatures were late 30s (centigrade). However this changed when it was mounted in a rack and had 10 of the 16 ports populated with mainly 10Gbe devices.
The temperature peaked at 71c. While the switch can handle that temperature we thought it best to see if we could improve it but adding a couple of extra fans.
Space was a issue but we managed to mount two more ‘Noctua NF-A4x20 PWM’ near the PCB. Unfortunately this is the only place internally we could get them to fit.

Wiring was a bit of a issue as there was a lot to squeeze in with two Y cables as well however it all fitted ok.
With the extra two fans the temperatures now hold at around 60c even with load and in a warm room. Noise levels are also perfectly acceptable.

Client needed a small but powerful system to run there resource hungry applications so this system has a i9, 32GB and a RTX 2080

Using some new and some used parts from the old PC we built this gaming PC for the client. Client was very happy with the result.

You can find out more or switch them off in settings.

This website uses cookies so that we can provide you with the best user experience possible. Cookie information is stored in your browser and performs functions such as recognising you when you return to our website and helping our team to understand which sections of the website you find most interesting and useful.

You can adjust all of your cookie settings by navigating the tabs on the left hand side.

Strictly Necessary Cookie should be enabled at all times so that we can save your preferences for cookie settings.

If you disable this cookie, we will not be able to save your preferences. This means that every time you visit this website you will need to enable or disable cookies again.